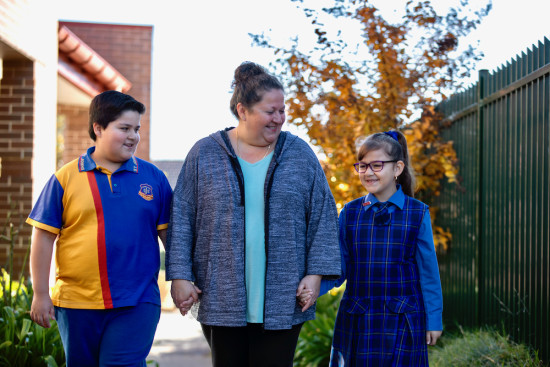 St John the Evangelist is a three-streamed Catholic parish primary school educating students from Kindergarten to Year 6 (K-6) in Campbelltown and the broader Macarthur region of New South Wales. We're a Catholic community that promotes excellence within a learning environment based on Gospel values.

As the first Catholic school in the Campbelltown region, St John's has a long and proud tradition of providing an excellent Catholic education to children from a number of local parishes.

As a parish school, grounded in the St John’s Catholic Parish community, it is intended that our school should be an integral and vital part of the whole parish and, indeed, of the wider Church community. It is intended that the spiritual growth and welfare of the students be carefully integrated with a quality Catholic education. This is a shared responsibility between the parish priest, principal, staff and parents, under the supportive supervision of both Catholic and federal and state government education authorities.

St John’s had its beginnings as early as 1849 when Archbishop Polding blessed the cornerstone of the building now known as Quondong (next to the Campbelltown Catholic Club). At the time it was called St Patrick’s School, the first Catholic school built by private enterprise in the colony. A number of dedicated Irish lay teachers ran the school until the Sisters of the Good Samaritan took charge of the school in the late 1880’s. The school continued on the site near the present Campbelltown Catholic Club until 1914, when it was transferred to its present location in Lindesay Street adjacent to St John’s Church. The school name was also changed at this time.

Our school continues to have a rich heritage in the tradition of the sisters of the Good Samaritan. They were instrumental in establishing a community inspired by faith in the good news of Jesus. We are inspired to continue the journey of faith and are nurtured by the charism of this order to achieve our mission of providing a quality Catholic community that enables each person to reach full potential in the light of our school motto, 'Walk in Peace and Joy'. 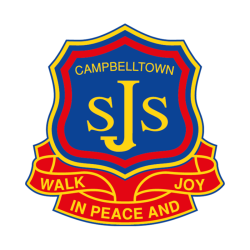 The St John's school badge is a shield mounted on scrolls which depict the school motto. The shield is an appropriate basis for the badge as it represents the strength and protection we know we need as we go forward to proclaim the message of the Kingdom. It gives us courage and reminds us that we are in turn, shielded and protected by a loving Father. The initials ‘S.J.S.’ – St John’s School – identifies our school as a place where the scripture is revered, taught and celebrated.

ST JOSEPH (RED) – St Joseph was the Foster Father of Jesus and husband of Mary.

VAUGHAN (GREEN) – Archbishop Roger William Bede Vaughan (1834-1883) was the second Roman Catholic Archbishop of Sydney from 1877 to 1883. The main aim of his work in Australia was the provision of Catholic education for children and the completion of the building of St Mary’s Cathedral.

THERRY (YELLOW) – Fr John Joseph Therry (1790-1864) was a Catholic priest, who came to Australia in 1820 to be a priest for the convicts. He helped build the first schools, established the building of St Mary’s Cathedral and organised Catholic life in the colony. Fr John Therry helped establish the first catholic school in Campbelltown named St Patrick’s School in the Quondong building, which he also designed. St Patrick’s School then moved to our present school site and the name was changed to St John the Evangelist.

POLDING (BLUE) – Archbishop John Bede Polding (1794-1877) was the first Bishop in Australia and Archbishop of Sydney. He helped establish many churches and schools in the early settlement. He founded the Sisters of the Good Samaritan in Sydney, who were later, the first educators at St John the Evangelist Primary School.

A CATHOLIC SCHOOL IN THE DIOCESE OF WOLLONGONG

Catholic schools have a long and proud history in the Australian educational landscape. Originally established by orders of brothers, nuns and priests in the nineteenth century, they are now almost entirely staffed and led by lay people.

Catholic systemic schools in the Diocese of Wollongong are either parish primary schools like St John's, or diocesan secondary or K-12 schools. They are all co-educational schools. (The diocese also has another seven independent congregational secondary schools, some of which offer single-sex education.)

Catholic schools have a unique character because as well as being places where learning is highly valued, they are places where priority is given to a values-based education in the Catholic faith. This involves all staff and students proclaiming the Good News of Jesus Christ to the world. Staff identify strongly with their school and take pride in their work and the school’s achievements.